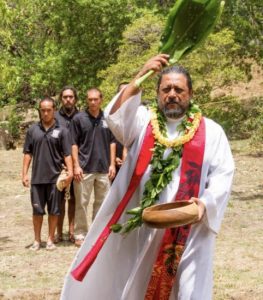 Dr. Kahu Kaleo (Iaea-Kekoanui) Patterson, comes from an ancient warrior line of chiefs related to Kamehameha the Great. He is one of the few ordained Hawaiian Priests in the Episcopal Church of Hawaii founded in 1862 by Kamehameha IV and Queen Emma.

Having served many Hawaiian Churches, on Kauai, Oahu, and Molokai, he is currently the Chaplain of Iolani Guild whose former lifelong President was Queen Liliuokalani. Kahu Kaleo is also a well known Professor in Peace Studies having developed the graduate courses in Hooponopono and Indigenous Peacemaking at the University of Hawaii, Manoa – Matsunaga Institute of Peace and Myron B. Thompson School of Social Work, where he lectured for many years.

In the community he is the founding President of the Pacific Justice and Reconciliation Center, and has traveled internationally as a Human Rights Activist, and has been a delegate and participant to many United Nations Assemblies and Forums.

He is the Chief Instructor of the historic Kaumakapili Church Dojo in Kalihi, and works closely with Professor Keaulani in Kaito Gakko Nuuhiwa Ryu programs.

Kaito Gakko Hawaii works in conjunction with the Native Hawaiian Church on Makahiki culture-based programs both in Prisons, and with re-entry Ola i ka Aina!