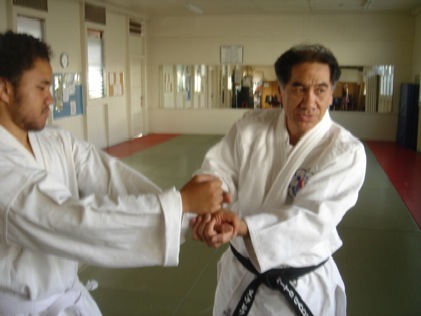 Honolulu Harbor and the fishing and shipping docks near Chinatown have long been the setting for the colorful martial artists of Hawaii.

From the days of the early Hawaiian warriors of the Kaumakapili and Nu’uanu district to the coming of the world in the whaling ships and merchant traders Hawaii has been the crossroads of the Asia and Pacific world.

Today those traditions of martial arts continue to mesh, flourish, and live on in humble soft spoken teachers such as Professor Bruce Keaulani.

In this continuity of traditions there are few  whose martial arts training are born of the hardness of the old ice houses,  the slippery docks,  the salty fish auctions,  and the streets and alleys of Chinatown.

Professor Bruce Keaulani, is probably one of the most well-known martial artists in Hawaii today to those who recognize true intent and character.  His heart of gold is 100% natural aloha.  He is still to be found gliding along the docks of Honolulu Harbor, close to Chinatown, and near to his Nuuanu Peace Academy Dojo.  Having been a fixture at the United Fishing Agency for many years,  “Uncle Bruce” is an unassuming expert in fisheries and fish auctions.  On any given day before the sun rises you can find him overseeing the morning auction.  Bring your rubber boots and walk with him among the fish being sold on washed concrete floors, and you will be amazed of his breath and depth of knowledge about life.

Of course his true passions are his family and his martial arts.  For him the two are one.  Studied in the ferment of the martial arts excitement of the 50’s and 60’s, in Hawaii and California,  Professor Keaulani went on to teaching and eventually founded his own Dojo in Honolulu at the Japanese Cultural Center,  the Young Buddist Association (YBA),  and later at the Buddist Peace Academy in Nu’uanu.

Professor Keaulani in the old Hawaiian tradition received the “ha” (life breath),  from his kupuna (elder),  and now holds the knowledge and spirit of Professor Nuuhiwa’s teachings.  He is naturally accomplished  in the forms, movements and techniques, and is a very humble and gifted teacher.

Professor Keaulani brings to Kaito Gakko many years of learnings and experience as a longtime devoted student of Professor Nuuhiwa. But he also brings his own gifts and talents,   he is steeped in his knowledge and training in traditional Japanese and Hawaiian Judo, Jujitsu, Karate, and Hawaiian Lua.  He holds the honored rank of Judan (10th Dan) in the American Jujitsu Institute, the oldest martial arts organization in the United States which began in Hawaii many years ago.    Professor Keaulani also follows in the healing traditions of Professor Okazaki’s restorative therapy and Hawaiian lomilomi and hooponopono traditions that are born of ohana (family) and the aina (the land)

Chosen by Professor David Nuuhiwa to lead Kaito Gakko into the new millenium,  Professor Keaulani welcomes you to come and feel the current and learn what life can be, that aloha is the most important gift of martial arts.